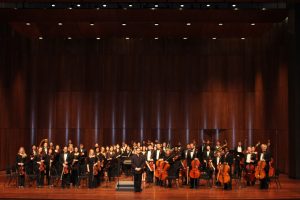 At Ole Miss we are especially proud of our many outstanding ensembles. The half-time show by the Pride of the South, a 300-member marching band, is a highlight of every home football game, while smaller pep bands travel to away games and also play at basketball games. During the spring semester, three concert bands perform concerts on campus and tour around the state. Each year the LOU (Lafayette/Oxford/University) Orchestra gives three concerts featuring major symphonic repertoire in the spectacular Ford Center for the Performing Arts. The orchestra’s annual concerto competition is a much-anticipated event: one or two winners are selected to appear as soloists. Ensembles from our very active choral program, which include the Concert Singers and four other choruses, frequently perform at both regional and national conferences of the American Choral Directors Association. In recent years, they have mounted several major choral masterpieces, including Handel’s Messiah, Bach’s Mass in B Minor, Beethoven’s Ninth Symphony, and Verdi’s Requiem.

Our smaller student ensembles are equally important for the experience that they provide and for their many performances, which enrich the cultural life of the University and the entire Oxford community. These ensembles include two jazz bands, the opera theater, an African drum and dance ensemble, low brass ensembles, and several percussion ensembles.

Learn, perform, and do — at Ole Miss Music.