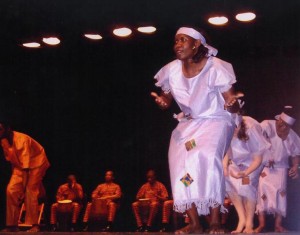 The Ole Miss African Drum-Dance Ensemble (OMADDE) was founded by George W. K. Dor in September of 2003, after a fifteen-piece set of carved Ghanaian drums was acquired by the University. Although it is the Department of Music’s newest ensemble, OMADDE has made a notable presence in the University and its larger cultural community. Through concerts at the end of each semester and during February (Black History Month), as well as other campus and off-campus performances, the ensemble continues to enhance multicultural life on campus and beyond, thereby serving as both a proof and a tool of cultural diversity at the University of Mississippi. Outstanding symbolic performances include the 2003 Open Doors Ceremony at the forecourt of the Lyceum, the International Conference on Racial Reconciliation, and the “Truth Project” held in January 2009 in Jackson, all under the auspices of the William Winter Institute for Racial Reconciliation. Major celebratory concerts include the commemoration of Ghana’s 50th Year of Independence held on March 6, 2007 in the Gertrude Ford Center for the Performing Arts, and the 50th Year of Integration at the University of Mississippi held on February 23, 2012 in the Nutt Auditorium. OMADDE has performed in Memphis, Tupelo, Columbus, Starkville, Jackson, Clarksdale, Oxford, and at the Bishop Gray Center at Canton, MS, during a variety of events on university campuses, at arts councils, in churches, and as part of festivals.

The music department offers African Music and Dance as a credit-earning course available to all students in both fall and spring semesters. For further information about OMADDE, please contact George W. K. Dor at 662 915-7269 or e-mail gwkdor1@olemiss.edu.