UMISSO (University Of Mississippi Steel Orchestra) was formed in 1995. It was the first world music ensemble organized at the University of Mississippi. The ensemble presented concerts on campus and well as performances for Mississippi days of percussion and state band clinics. It has also performed at the Double Decker Arts and Music Festival, the Goombay Gulf Coast Festival, the Missouri day of percussion, church concerts and weddings. 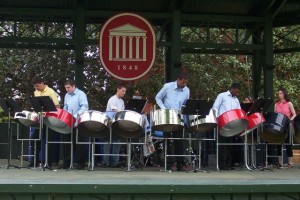 The steel drum (pan) has a rich history. It was invented on the island of Trinidad around World War II and is the national instrument of Trinidad and Tobago. The roots of the steel drum reach back to African slaves, who were placed on the island by Spanish and French plantation owners in the 16th century. As a result of their constant struggles to survive the hardships placed upon them by their masters, most of these African slaves lost their native languages, leaving music as the only link to their heritage. What’s now known as steel drum, or pan band, began with the metal beating bands of the early 1930s. The players used all metallic instruments (such as tin pans, biscuit drums, and dustbins). It was soon discovered that these metal instruments changed pitch after being beaten. By the 1940s, pan innovators experimented with note patterns. Today, the drum is constructed from the bottom of a 55-gallon barrel, sunk down in a concave fashion and precisely tuned to shape and create distinctive notes.