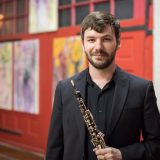 In Fall 2019, Austin Smith was appointed Instructor of Oboe at the University of Mississippi, where he directs the oboe studio, teaches applied oboe methods, and plays with the faculty wind quintet.

Smith is in constant demand as an oboe reed maker. Since 2009 he has made professional reeds for Innoledy, a woodwind supply company based in Manhattan, where professional oboists around the world purchase his reeds. He has given reed making masterclasses at the Cincinnati College-Conservatory of Music, the Hartt School, the Lucarelli Oboe Masterclass, and the University of Mississippi.

Previous to his appointment to the University of Mississippi, Austin was Instructor of Oboe at Mount Saint Joseph University where he also played with the faculty wind quintet. He holds a Bachelor of Music degree from the Hartt School of Music, and a Masters of Music degree and Artist Diploma from the Cincinnati College-Conservatory of Music. His main teachers are Bert Lucarelli and Mark Ostoich.